I’m currently sifting through mountains of literature on spider biology searching for references to silk use in courtship and sexual communication. One of the particular topics I’m interested in is the rarely reported ‘bridal veil’. So far I’ve found records of bridal veils in 12 families, all in the Araneomorphae. I’ve included photos of most of the species in question (or a species in the same genus) to highlight the morphological diversity of the spiders that share this weird and wonderful behaviour!

Courting a female can be a risky business. Spiders are predators (with some exceptions), and sometimes highly aggressive females would rather treat a male as dinner than a date. Male spiders have diverse, complex repertoires of courtship behaviours, some of which most likely function to inhibit the predatory tendencies of females.

The paired pedipalps of male spiders are modified for transferring sperm. This means that, usually, the male needs to copulate twice in order to secure paternity of as many offspring as possible. The mechanics of copulation are often complex, and the male can’t afford any  untimely interruptions. Possibly, the bridal veil has a role to play…

Bristowe coined the term ‘bridal veil’ in his 1958 paper describing the mating behaviour of the crab spider Xysticus cristatus and Xysticus krakatuensis (Thomisidae). 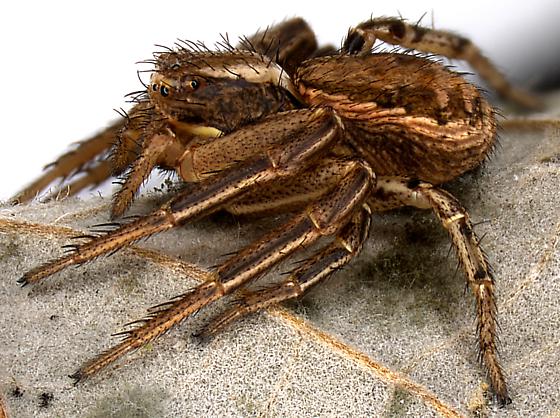 Part of the male’s courtship behaviour includes anchoring the female’s legs and cephalothorax (front body segment) to the substrate with a ‘veil’ of silk threads. After mating, the female apparently has no trouble freeing herself from her silken bonds. 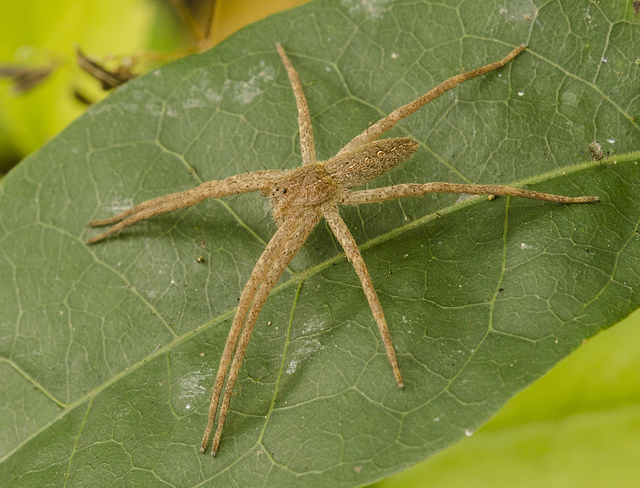 In this species, courtship and mating take place as the spiders hang in midair, suspended by their draglines below a leaf. Before copulation, the male ties up the female’s first two pairs of legs in front of her cephalothorax, by spinning silk as he twirls the female around on her thread. Bruce and Carico (1988) suggested that the split-second that it took for the potentially cannibalistic female to struggle free from the veil gave the male just enough time to climb up out of harm’s way.

Oxyopes schenkeli (Oxiopidae) males have very similar bridal veiling behaviour, which results in the binding of the female’s first three pairs of legs with silk. 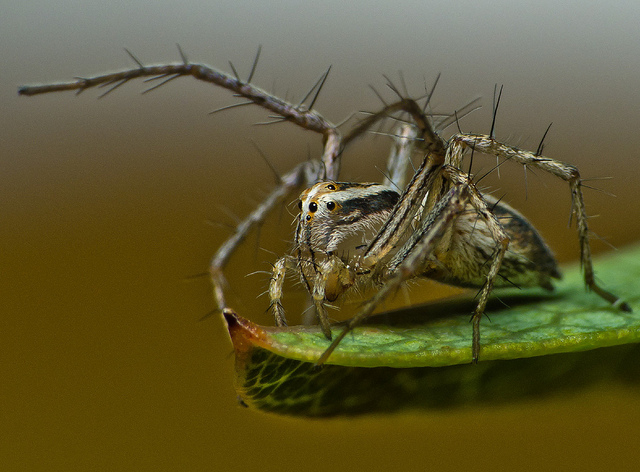 The context of courtship in these spiders is also up in the air, suspended by silk draglines from a leaf (60-90 cm above the ground). After observing at least one male getting cannibalised despite spinning a bridal veil, Preston-Mafham 1999 proposed that the main function of the bridal veil is to stimulate the female to mate, possibly via pheromones (chemical signaling molecules) on the silk.

A touch of silk 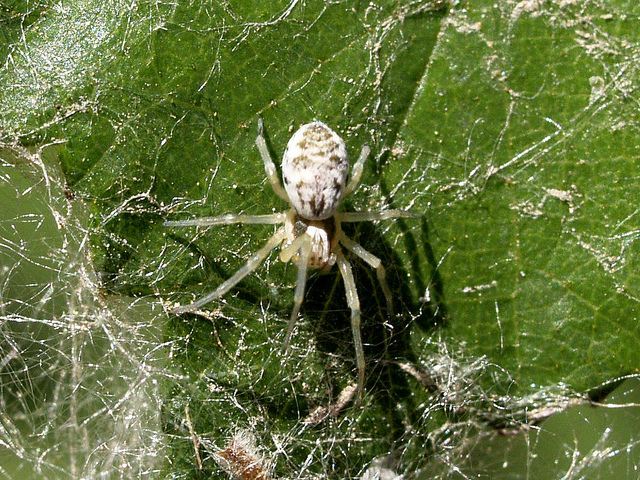 The male begins by depositing silk on the web, at a distance from the female, before approaching and applying a light silk wrapping to her body. Starr (1988) concluded that males of this species are not in any real danger from females – although females occasionally rushed towards males, males were able to easily avoid them.

Meta segmentata female (photo by Brandobras, licensed under CC BY 2.0)

The veiling behaviour in this species was described as “partial wrapping of the female as though she were prey”. Lopez (1986) suggested that the silk of the bridal veil might inhibit female aggression through physical contact with sensory hairs on her body. 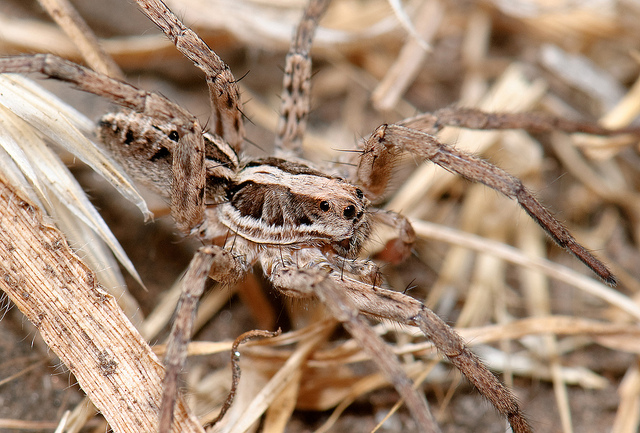 Penultimate (one molt away from maturity) Schizocosa male (photo by Marshall Hedin, licensed under CC BY 2.0)

A fairly sparse bridal veil is a common element of courtship in the genus Latrodectus (Theridiidae). Since I study western black widows (L. hesperus), I’ve included a video of one of ‘my guys’ doing his thing (video taken by Samantha Vibert)

Ross and Smith (1979), studying L. hesperus, and Aisenberg et al. (2008), studying S. malitiosa, suggested that the bridal veil silk is impregnated with a pheromone that induces female catalepsy. Placing the pheromone-laden silk directly on the female’s body might be the best way to ensure that she receives the chemical message and remains passive throughout copulation.

Putting a ring on it 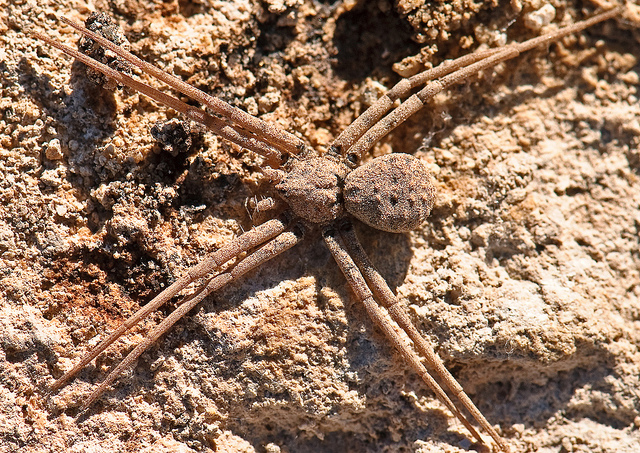 These are wandering spiders, and mating takes place on the ground. With the female’s legs all drawn up close to her cephalothorax, the male circles around her, binding her legs together tightly with a ring of silk. After the first copulation, he’ll add some more silk, reinforcing the ring, then mate a second time. As soon as the second copulation is completed, the male beats a hasty retreat. A second later the female breaks free from the silk ring, and spends some time grooming, trying to remove all the silk from her legs.

Thalassius spinosissimus (Pisauridae) females build a special mating web and hang from it in ‘mating posture’ with all the legs drawn in tightly as described above for the homalonychids. Males in this species also ring the female’s legs with silk (Sierwald 1988). 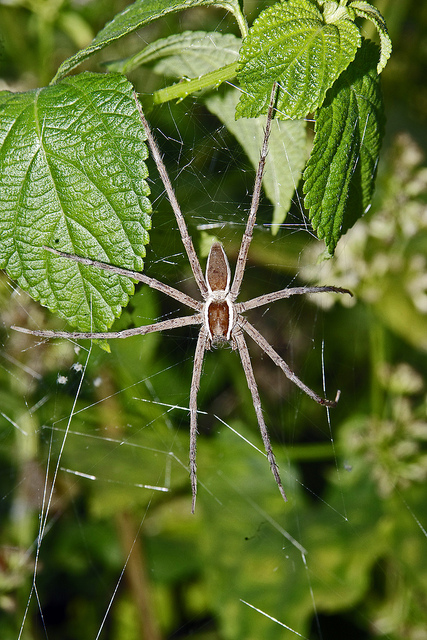 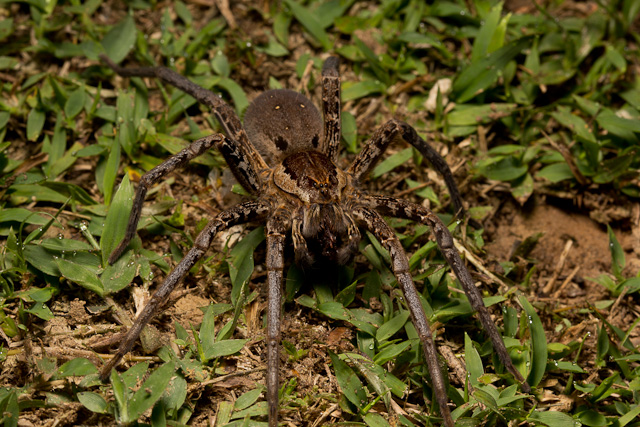 The male starts by spinning an ‘outer’ ring of silk around the female’s tibiae, then he adds a second, ‘inner’ ring around the patellae (see diagram with names of leg segments here). His handiwork complete, he tips the trussed-up female over onto her side and mates with her (Merrett 1988).

Cupiennius salei (photo by Ian Morton, licensed under CC BY 2.0)

Here’s where it starts to get interesting. Normally, when mating with females from their own species, Cupiennius males don’t go in for the bridal veil thing. However, when researchers paired C. coccineus males with C. salei females (who are on average a bit bigger than the C. coccineus females), some males circled the female, depositing silk on her legs. Two of the three males that spun bridal veils were able to mate with the heterospecific females, while the third became lunch. As Schmitt (1992) noted in reference to this unfortunate male’s demise, “Obviously, the male silk did not seriously affect the female’s mobility.”

One explanation is that the ‘veil’ in this situation is a result of some confusion over whether to treat the too-large female as a potential mate, or prey  (these guys can take down prey larger than themselves and normally use silk in this context). Another option is that this is a part of the courtship repertoire of Cupiennius males, but it’s reserved for especially large, potentially dangerous, females and was never seen before because usually similarly sized individuals were paired for laboratory mating observations (Schmitt 1992).

Courtship in both Argiope aemula (Araneidae), 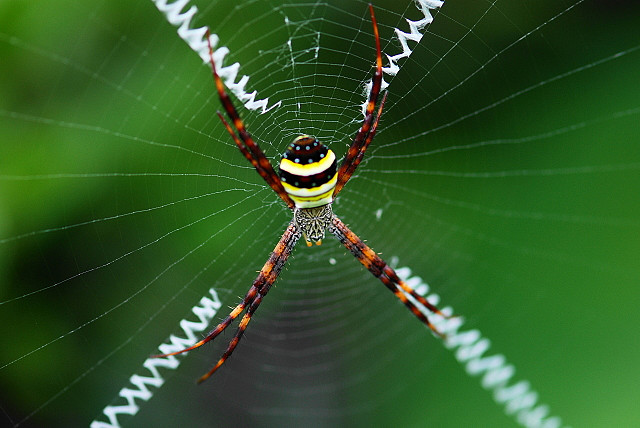 Argiope aemula female (photo by falilin, licensed under CC BY 2.0) 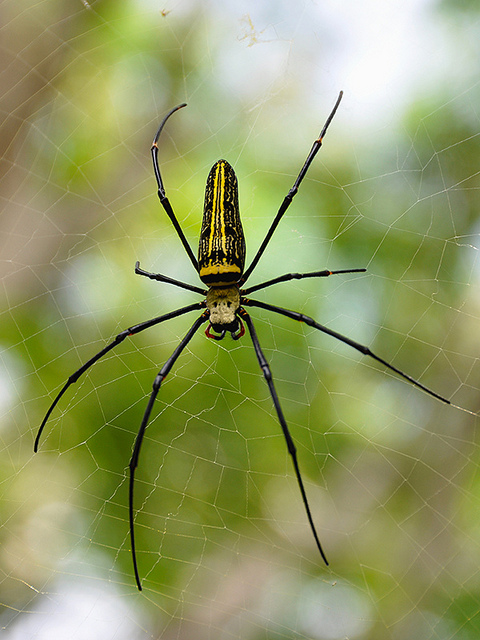 Nephila pilipes female (photo by drriss, licensed under CC BY 2.0)

takes place on the female’s orb-web. The tiny male does a variation on the ring-type bridal veil, doing his silk spinning on the top of the female’s cephalothorax and abdomen (he’s so small he has room to walk around on there). He attaches silk at the bases of the female’s legs, building up a complex network of silk (Robinson and Robinson1980).

Recently, Zhang et al. (2011) published the first experimental study of the function of a bridal veil. The authors wanted to figure out if the bridal veil in Nephila pilipes has any role in reducing female aggressiveness, and if so, whether chemical and/or tactile cues were responsible.

The researchers then compared the success of normal, silk-slinging males with males that had their spinnerets covered with super-glue*. It turned out that these males did just as well as normal males by going through the motions of bridal veiling behaviour even though they were prevented from spinning silk. Further experiments preventing females from detecting potential chemical and/or tactile cues associated with bridal veil spinning behaviour suggested that both touch and smell are likely involved.

Are bridal veils physical restraints or stimulating strands? Is silk a substrate for sexy scents or catalepsy-inducing compounds? It’s really not clear. Given that female spiders commonly produce silk-bound pheromones, I suspect that male silk pheromones are probably important. However, it’s becoming increasingly apparent that spider communication systems are highly sophisticated, and messages may be simultaneously transmitted between individuals via multiple modalities. Spiders use vibratory, chemical, tactile, and (sometimes) visual signals and senses in a variety of combinations, and untangling this mystery will take a lot more investigation!

*In case you’re concerned that super-gluing spiders is not a nice thing to do, I can assure you that cyanoacrylate is recommended for use on spiders in the book Invertebrate Medicine. I’ve looked into it because I’ve done some spider gluing myself.

References without direct links in the text:

Schmitt, A. 1992. Conjectures on the origins and functions of a bridal veil spun by the males of Cupiennius coccineus(Araneae, Ctenidae). Journal of Arachnology 20:67–68.

18 thoughts on “The bridal veil: how spiders tie the knot”